This mixed-use design project was our first semi group project. It was our last project of the 2nd year. We were given an imaginary block of land where it would fit 20 multiple dwellings. Each of us chose a lot in the block. Our design was to have multiple use, mainly housing and commercial, within the 50 square meter lot with height limitation; provide two public entrance that connects to the next lot; and have four or more residential units. The rest was up to the students to decide.

Intertwined Dwelling was designed for happening art. Inspired by Jim Dine’s “The Smiling Workman,” I thought it could be interesting to have a stage-like space. The lower part of the building would be commercial which would include a bar, restaurant, cafe, and shops with space for stage for artists to perform. The stairway to the dwellings would also become potential stage of the residents’ daily life. The intertwined dwellings would create spaces where each unit would have two or three floors and sky light and windows for daylight.

Following images are some initial sketches. In the beginning, I was interested in floating spaces where people would live and/or perform. Then I started getting more realistic about how each residential units would function and what people would see and experience as they move around the units. 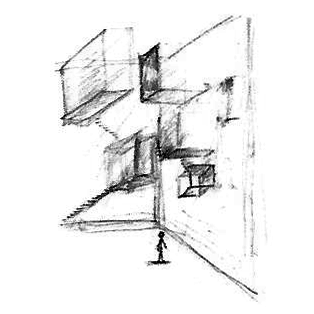 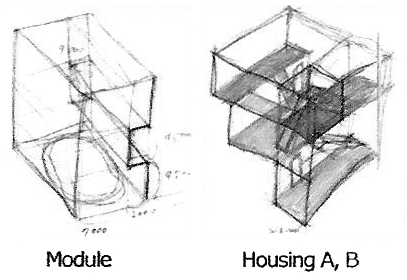 This is a rough sketch of section. Stage area is the main focus for people approaching the building with bar, cafe, restaurant, and shops surrounding it.

Here is the final model. Just a quick note, the summer before this semester (Korean academic year starts in March, first semester ends in June, summer break is from July to August, and second semester starts toward end of August leading to December) I had studied Adolf Loos’ works. The facade design somewhat follows his minimalist, austere style similar to the House for Three Generations.

Here is an opened up view of the model to see the inside.

This is what happened when we put together the 20 dwellings. Perhaps we should have talked to our neighbors more often to coordinate design features. I suppose it’s the downfall that happens when everyone is so immersed in their own project and have no time or energy to care about what’s happening to the lots next to theirs.

Here are some drawings of Intertwined Dwelling.

Architect View all posts by Yereem